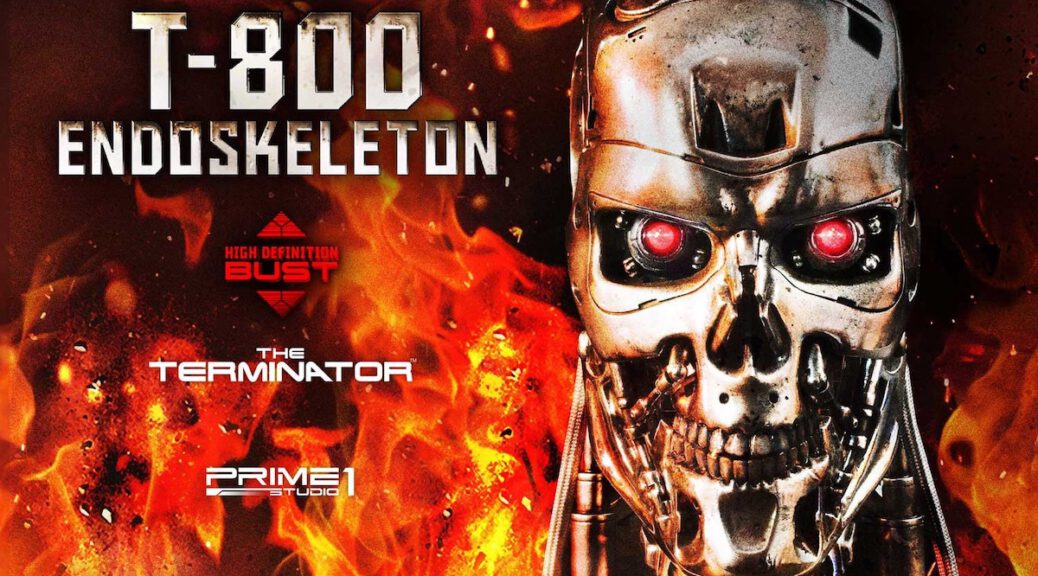 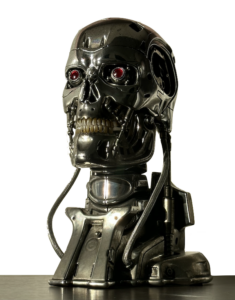 [Introduction]
Prime 1 Studio describes this product as a High Definition Bust. We are talking about the licensed Terminator endoskeleton head in 1:2 scale. The exact motif is the Head Bust to the movie „Terminator“ by James Cameron from 1984. Furthermore, this is the first product of Prime 1 to the Terminator franchise. A few more were to follow. One of the finest 1:4 scale full body statues is coming from Prime 1 Studio. I purchased one of the 500 T-800 Endoskeleton Busts on ebay and took a closer look at the resin product with illuminated eyes and „high detail“. I was very excited because the photos from the web already looked very promising and I am also a big fan of the Terminator movies at all. It is one of the biggest Sci-Fi movies with quite a deep story telling of all time. Hope Prime 1 Studio won’t ruin it for me.

Background
[Background]
Both of the Terminator movies, the first one from 1984 as well as the legendary second one called „T2“ from 1991, belong respected for everyone who gives something on himself and some cinema knowledge. They are timeless classics, with a visionary portrayal of an dramatic and self started end of humanity, brought down by the machines, the terminators we – mankind – created. Groundbreaking technology, top-notch production design, fantastic action choreography, insanely good style and an impossibly dense and moody atmosphere – you can describe the films with many different adjectives. Crystal clear: the character of the emotionless killer, the terminator model T-800, has become a part of cinema history. Arnold Schwarzenegger did a perfect, absolutely convincing performance in this Terminator role, who carried out his mission far away from any emotional movement or facial expressions. 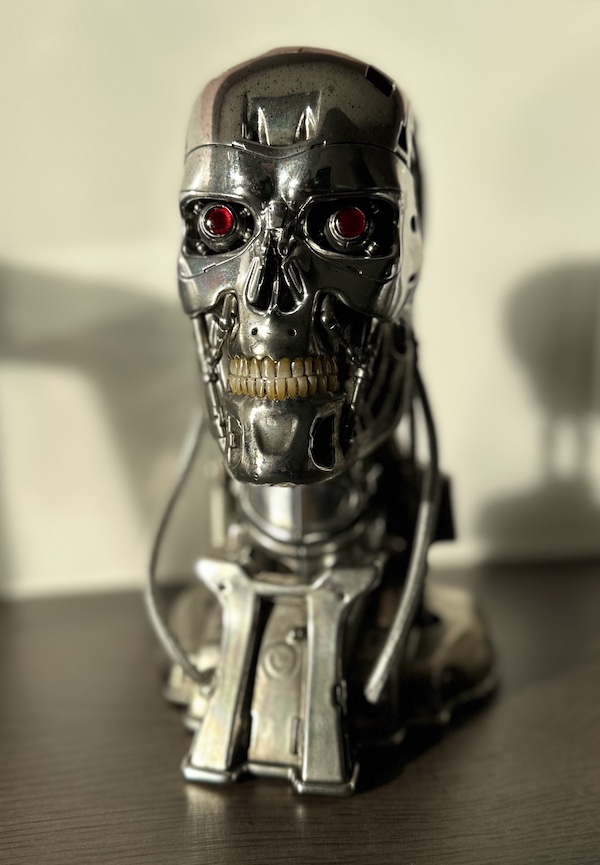 Without all that makes him appear human, without this artificial human costume, what remains is a machine made of metal, far superior to the abilities of humans. The then nevertheless dangerous expression of this almost metallic skull is only intensified by the red flashing eyes. Gorgeous. This theme should also find illustration in the bust of Prime 1 Studio.

[Thoughts & Commentary]
Photographs are taken with an iPhone 14 Pro Max inside a LED-flooded light tent with a light gray background.

In terms of scale, this is what is known as a Half Size Bust. A half size bust so to speak, or 1:2 or 1/2 scale bust. Prime 1 Studio set the number of pieces at 500 worldwide. This bust has the dimensions (HxWxD) of 21cm x 13,1cm x 13,3cm. That may read ’small‘ at first, but then in reality it actually kind of looks like „half a skull“ in size and just looks absolutely convincing, as if it had been built right out of the movie, in metal, in front of you. Great.

What I found impressive was the ability to move the head slightly. It’s not fixed. This is only possible to a very limited range, but it really makes a visual difference when the T-800 looks slightly tilted to the side. The vertical linkage on each side (under the ear to the base) as well as the metal hoses go along with these slight adjustments to the orientation of the bust and are looking good all the way. At no point did I have any practical doubts that we are dealing with a metal alloy here. But this is wrong, just an impression of the color they used for this. However, it is resin, which was painted in high quality and it can mirror it’s environment. 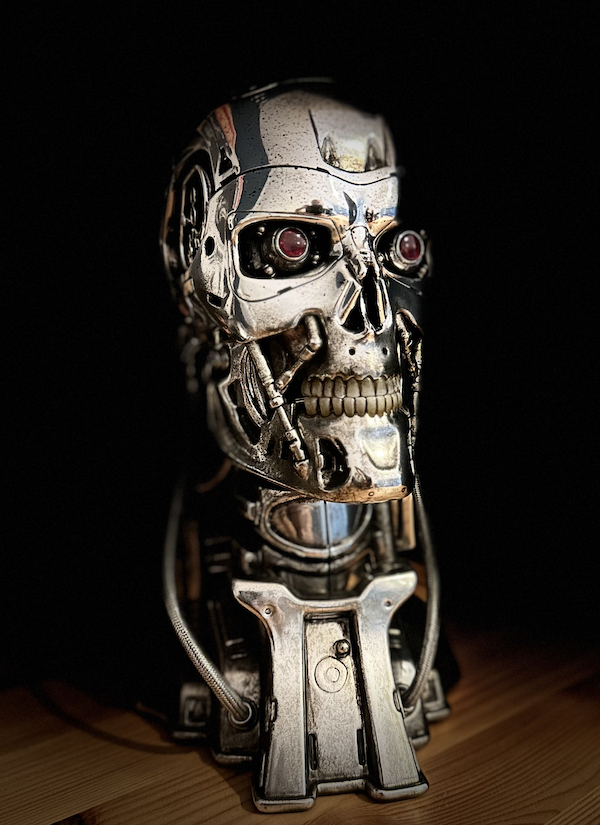 Each bust is in a sense handmade and in their exact execution in detail, so to speak, a unique but each. These artistic means, which can then be seen in traces of ricocheted projectiles or other witnesses of the war, leave a very credible impression. Such a machine is not clean, there are traces of oil, fine dust at the points of movement and other witnesses of hard operations out there in the field – fighting mankind. 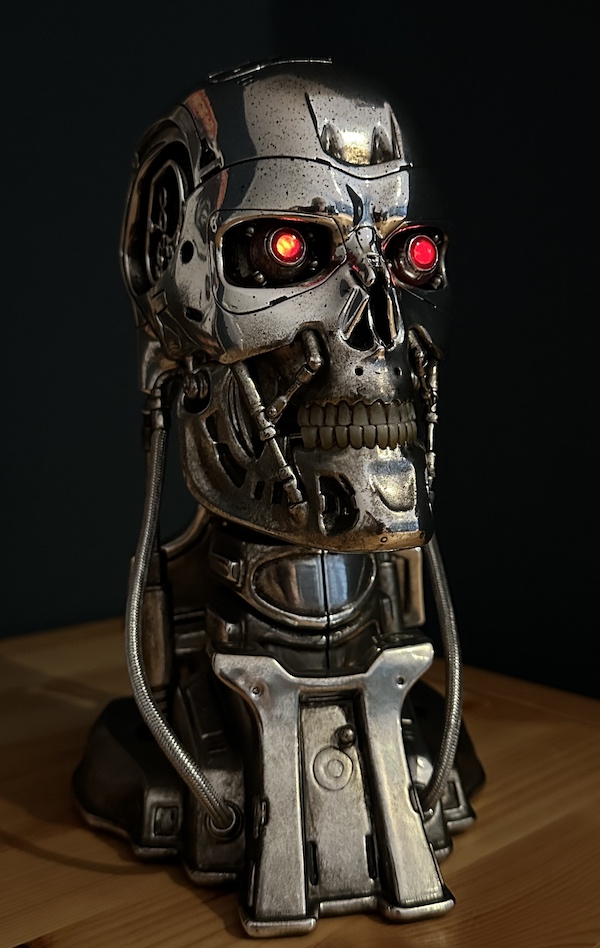 A real eye-catcher of this bust are the red glowing eyes. This LED light is turned on and off by a switch on the side of the head. You need to know where, because you can’t see that this part of the bust is to push. Thanks to this feature we now get exactly for the living room what we know from the movies (at half size of course) – great job. 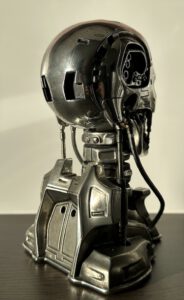 The LED light is powered by two small button batteries that are hidden behind a piece of skull plate on the other side of the skull. With a little bit of force you cleverly can remove this plate (which is held to the skull by magnetic force) to swap batteries. That is the main ’special feature‘ of this high definition bust. One element, which works in secret, is a ball-shaped connector made of unpainted plastic that connects the skull and the spine/base. This piece allows the easy adjustment of the head’s posture that I already mentioned above. 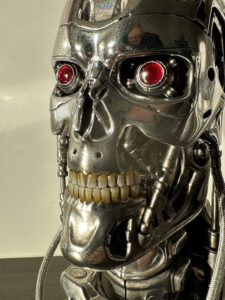 [Conclusion]
Prime 1 Studio opened up their licensed Terminator franchise with this half size bust in high definition format. And it is a really good one. After that Prime 1 Studio announced and produced 52cm high figure, which is also wonderful to look at (also with red eyes). I have to admit that the red illuminated eyes are a real eye-catcher, once you look at the bust, you also forget about the 1:2 scale effect. I really recommend to put it somewhere with a certain high like around 1,5m or so. And don’t put it in between different other items, doesn’t look nice at the end. This one deserves it’s own space and place. Nice side-effect of the lights they used: If you press the switch to turn off the light, it takes another 1-2 seconds until the light goes out – nice. While the bust is rare with its limitation to 500 pieces worldwide, it is not out of stock yet. It can be purchased online at a price of $349, – USD, although shipping, at least import fees (customs) will be added to this. A great piece that I am glad to have in my collection.