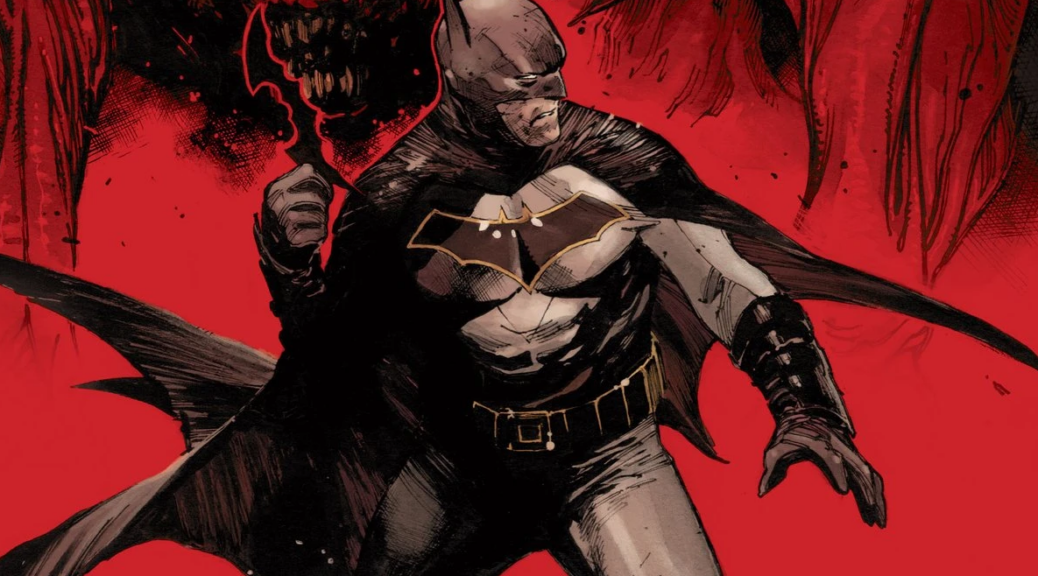 [Introduction]
From the „DC Comics Designer Series“ comes one of the DC classics among the comic characters par excellence: Batman. The Dark Knight, Gotham City’s Hero and man with secrets – now he climbs out of the comic into the real, three-dimensional world (made of porcelain). This figurine is made of high quality resin and the character and its pose is based on a template by Olivier Coipel, made by Alejandro Pereira. The sculpture is 28cm high, hand-painted and limited to 5,000 pieces worldwide. I spent a lot of time looking for the right Batman figure for my collection. And this one here met my expectations in theory and from a WWW perspective, kind of remote. Now to the real thing in the real world. Batman, come out…!

Background
The figure, Batman in exactly the pose shown, is based on a comic cover for the “Dark Knights” series and there the part entitled “Batman: Lost”. As can be clearly seen on the largely red cover picture, we see Batman there with a serious expression on his face and apparently only moments away from swinging his throwing boomerang through the air. Not much needs to be written about Batman and the character itself, at least not here. And if there is a fundamental need for knowledge on the subject, Wikipedia is a good first point of contact.

[Thoughts & Comments]
Photographs were taken with an iPhone 12 Pro Max inside an LED-light tent with a background in light grey.

I think that all previous Batman film-series by people of my generation, my cinema age, so to speak, had something good, definitely something contemporary and also always something new and fresh. For me, the main actors Michael Keaton, Val Kilmer, George Clooney and of course the fantastic Christian Bale (and now also Ben Affleck) shaped the physical existence of this humanoid artificial Bat – a men in a very powerful costume, eh, suit. This figurine, on the other hand, is none of those and yet something very much of its own, and that is Batman. 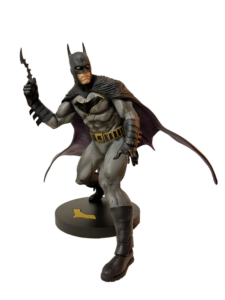 The design is successful and rather classic. Nowadays, Batman is primarily in all black, after all, he is also the Dark Knight. But in the past, the outfit was different. And in this figure, they combined the more classic aspects, colors and also some contours with the modern, fresh features, harder edges and delicate overdrawings. However, without seeming silly or, for example, the muscles senselessly overdrawn to attract the attention of the viewer – nothing of that. Olivier Coipel designed a dynamic situation will an excellent character choreography.

I also liked another special feature in the craftsmanship here, and that is the base, yes, really. It is round, classically designed in satin black and features the yellow Batman logo. It looks good, but only provides support for one of the two legs – and that is quite special. The other leg, underlining the overall momentum of the snapshot, aligns forward to perform the soon-to-be-dropped Batarang move. The uneasiness of looking at the really fabulously painted figure with comic charm comes from the cape. It practically whirls through the air at the moment of catching the figure – well done, as it gives the figure the impression of a snapshot. 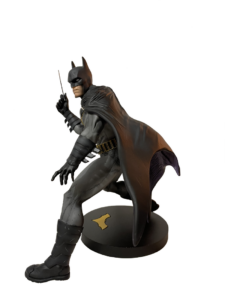 [Summary & Final Thoughts]
„Batman“ was designed by Olivier Coipel. The good man has done a really good job. The material is high quality, the paint and the painting very well done. The figure is very stylish in itself and thus for fans with high probability of interest. It belongs to one of the figures that demands a lot of space. It is very wide, fills the space with a noticeable dynamic, starting from the situational movement of the figure and makes itself chic in the most diverse environments. My figure has the number 0989 from an edition of 5,000 pieces and I was able to purchase it online for 115,- Euro. It’s a very nice figure.